Whales scooped up $5.5B in Bitcoin as BTC price dropped below $36K

Derivatives data shows whales aggressively bought the dip as Bitcoin's price dropped below $36,000, but that doesn't mean BTC has bottomed yet.

The stream of negative regulatory news concerning Bitcoin (BTC) and cryptocurrencies has been nonstop over the past couple of weeks.

Today's FUD — fear, uncertainty and doubt — news that failed to cite any actions and merely refreshes old information from China. A statement from the Chinese government revealed plans to "crack down on Bitcoin mining and trading behavior."

While retail traders are easily scared by this type of news, whales and market makers know how to spot a buying opportunity, which was the case for today's drop to $36,200.

China banned Bitcoin trading… in 2017
The Chinese Financial Stability and Development Committee minutes presented general guidelines on multiple issues, including reforming mid-sized financial institutions and cracking down on illegal securities activities. Therefore, it was neither a targeted attack on Bitcoin nor did it differ from the actions and discourse from previous years.

On May 18, trade associations under the People's Bank of China warned financial institutions and other member organizations to not engage in crypto business transactions.

However, crypto trading in China has been banned since September 2017, and concerns regarding the carbon emissions of Bitcoin mining operations were expressed over three weeks ago by Chinese state media outlet PengPai.

Even market-making platforms have been targeted by Chinese authorities since 2018. Some crypto trading sites continued to operate illegally in the country, but most were identified and shut down by authorities in 2019.

Whales and market makers on OKEx reached a 1.08 long-to-short ratio in the early hours of May 21, favoring longs by 8%. It is worth noting that this level was the lowest in 30 days, indicating a lack of conviction. However, these pro traders entered bullish positions over the day as Bitcoin retraced below $37,000, favoring longs by 62%.

Volume spikes confirm the theory
Trading volume is the best indicator to confirm whale activity, and those peaks need to coincide with price bottoms. Even though every trade has a buyer and a seller, extreme volatility can occur on low trading volumes, therefore not necessarily involving pro traders. 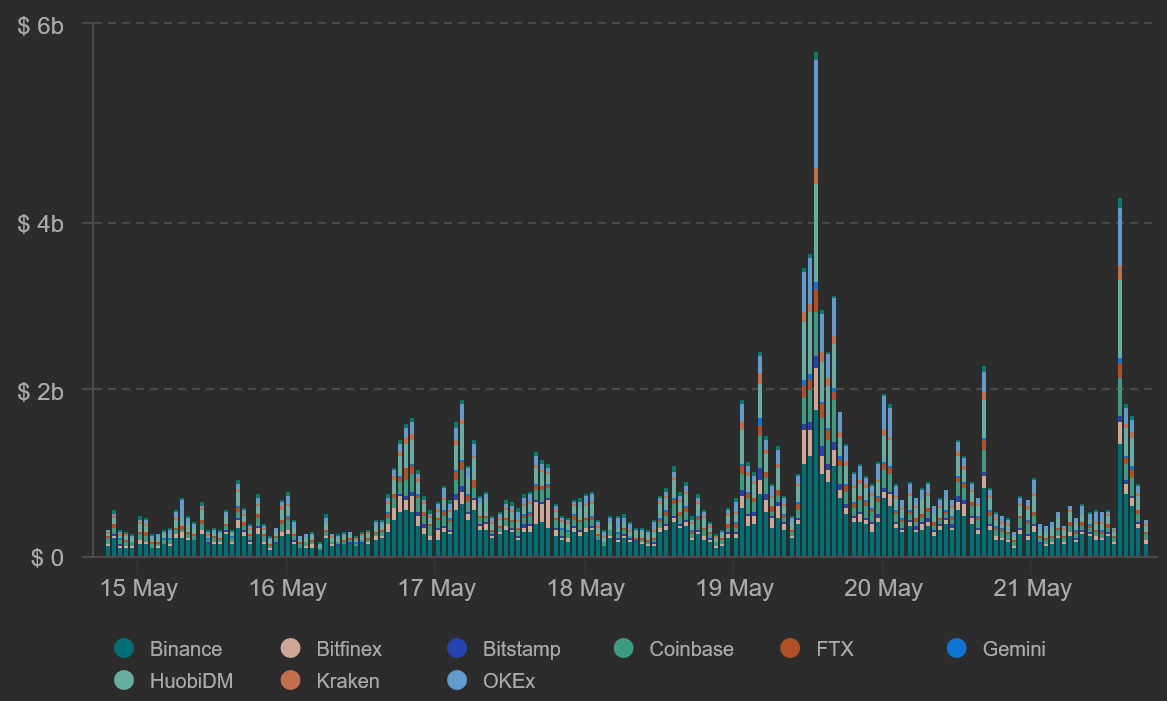 Aggregate Bitcoin spot volume. Source: Coinalyze
By looking at the above data, there should be no doubt that whales and market makers aggressively bought the $36,200 dip on May 21. Spot exchange volumes surpassed $5.6 billion in four hours, which is extreme even for a 12% price movement.

To put things in perspective, the daily average volume over the past month stands at $11 billion. Therefore, by combining this data with derivatives exchanges' long-to-short ratio, one should assume that some heavy players were brave enough to buy today's dip.